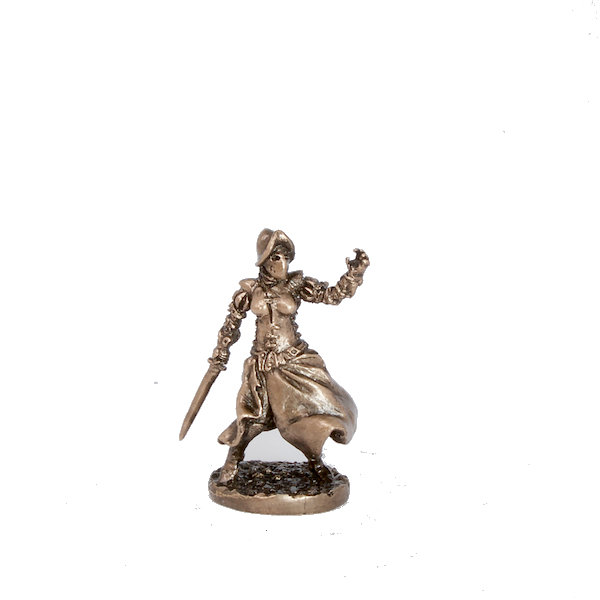 This is a brass figure of Soulcatcher, one of Ten Who Were Taken - THE BLACK COMPANY stories by Glen Cook.

Soulcatcher was a member of the Ten Who Were Taken, the ten most powerful servants of the Dominator during the era of the Domination. Centuries later, she was the legate who commissioned the Black Company into the service of the Lady's Empire. She ferried them across the Sea of Torments in that fateful trip to the northern continent. Her sponsorship, and later betrayal, of the Company would set in motion numerous battles, wars, and redrawn maps on both continents of the homeworld. In final two Books of Glittering Stone, she took control of the sprawling empire of Taglios, renaming it the Protectorate. She proved to be the Company's longest-lived human adversary throughout the Black Company series.
It would be revealed that Soulcatcher was the younger sister of the Lady, though they were not separated by many years. A remarkably powerful sorceress, Catcher was exceeded only by the buried Dominator and the Lady at the height of her power. She was notorious for her ability to speak in entirely different voices, widely feared for her madness, and – after the Battle of Charm – recognized as an unpredictable wildcard who influenced history on the grandest scales.

This figure is in near 40mm size (one of the classical sizes for miniatures), the real height of figure with base could be slightly various.

It would be a nice gift for any medieval/fantasy fan.