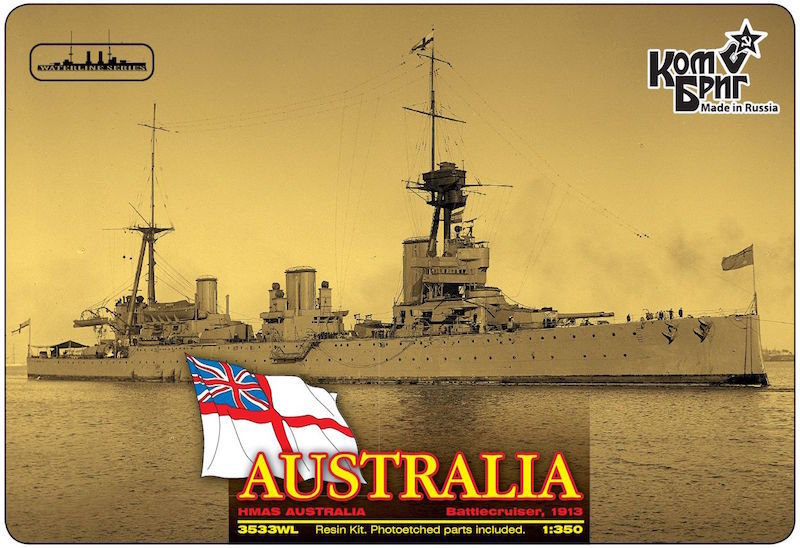 HMAS Australia was one of three Indefatigable-class battlecruisers built for the defence of the British Empire. Ordered by the Australian government in 1909, she was launched in 1911, and commissioned as flagship of the fledgling Royal Australian Navy (RAN) in 1913. Australia was the only capital ship ever to serve in the RAN.(I)

At the start of World War I, Australia was tasked with finding and destroying the German East Asia Squadron, which was prompted to withdraw from the Pacific by the battlecruiser's presence. Repeated diversions to support the capture of German colonies in New Guinea and Samoa, as well as an overcautious Admiralty, prevented the battlecruiser from engaging the German squadron before the latter's destruction. Australia was then assigned to North Sea operations, which consisted primarily of patrols and exercises, until the end of the war. During this time, Australia was involved in early attempts at naval aviation, and 11 of her personnel participated in the Zeebrugge Raid. The battlecruiser was not at the Battle of Jutland, as she was undergoing repairs following a collision with sister ship HMS New Zealand. Australia only ever fired in anger twice: at a German merchant vessel in January 1915, and at a suspected submarine contact in December 1917.

On her return to Australian waters, several sailors aboard the warship mutinied after a request for an extra day's leave in Fremantle was denied, although other issues played a part in the mutiny, including minimal leave during the war, problems with pay, and the perception that Royal Navy personnel were more likely to receive promotions than Australian sailors. Post-war budget cuts saw Australia's role downgraded to a training ship before she was placed in reserve in 1921. The disarmament provisions of the Washington Naval Treaty required the destruction of Australia as part of Britain's commitment, and she was scuttled off Sydney Heads in 1924.
Save this product for later