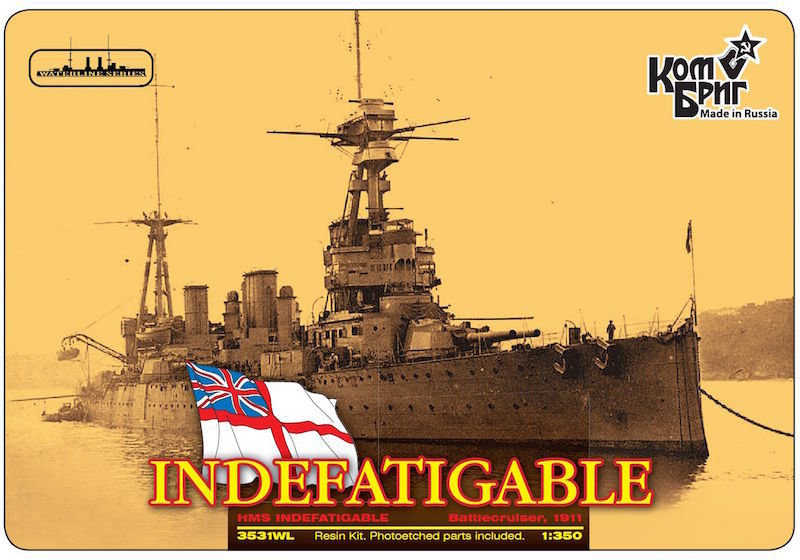 HMS Indefatigable was a battlecruiser of the Royal Navy and the lead ship of her class. Her keel was laid down in 1909 and she was commissioned in 1911. She was an enlarged version of the earlier Invincible class with a revised protection scheme and additional length amidships to allow her two middle turrets to fire on either broadside.

When the First World War began, Indefatigable was serving with the 2nd Battlecruiser Squadron (BCS) in the Mediterranean, where she unsuccessfully pursued the battlecruiser Goeben and the light cruiser Breslau of the German Imperial Navy as they fled towards the Ottoman Empire. The ship bombarded Ottoman fortifications defending the Dardanelles on 3 November 1914, then, following a refit in Malta, returned to the United Kingdom in February where she rejoined the 2nd BCS.

Indefatigable was sunk on 31 May 1916 during the Battle of Jutland, the largest naval battle of the war. Part of Vice-Admiral Sir David Beatty's Battlecruiser Fleet, she was hit several times in the first minutes of the "Run to the South", the opening phase of the battlecruiser action. Shells from the German battlecruiser Von der Tann caused an explosion ripping a hole in her hull, and a second explosion hurled large pieces of the ship 200 feet (60 m) in the air. Only three of the crew of 1,017 survived.
Save this product for later