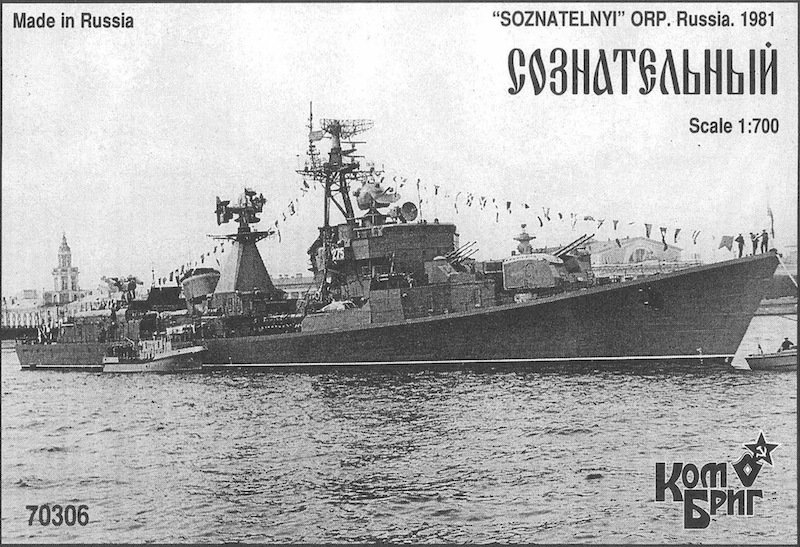 This design was a smaller version of the Neustrashimy class destroyer which was seen as being too large and expensive for economic series production, as well as too slow. Detailed design changes eliminated some of the problems seen during trials of the Neustrashimyy. A production run of 100 ships was planned but this was curtailed because of the advent of the guided missile. 32 were ordered, but 4 ships were completed as Kildin class (Project 56E/EM), and the last was canceled.

The Soviet navy would eventually retrofit 7 Kotlin ships to carry SAMs, these ships were known to NATO as the Kotlin SAM class (Project 56A), one more was modified and sold to Poland (Project 56AE, being the only Project 56 destroyer exported). Later versions of the SAM system, such as the Volna-M (SA-N-1B), Volna-P, and Volna-N provided greater missile range and capability.

ny fixed-wing aircraft; the air wing was composed entirely of helicopters. They were designed primarily as anti-submarine warfare (ASW) vessels, and her weapons and sensor suite was optimized against the nuclear submarine threat. Shipboard ASW armament included a twin SUW-N-1 launcher capable of delivering a FRAS-1 projectile carrying a 450 mm torpedo (or a 5 kiloton nuclear warhead); a pair of RBU-6000 ASW mortars; and a set of torpedo tubes. For self-defense, the Moskvas had two twin SA-N-3 SAM launchers with reloads for a total of 48 surface-to-air missiles, along with two twin 57 mm/80 guns. A "Mare Tail" variable depth sonar worked in conjunction with heliborne sensors to hunt submarines.

Their strategic role was to defend the Soviet ballistic missile submarine bastions against incursions by Western attack submarines, forming the flagships of an ASW task force.

Leningrad was taken out of service in 1991, but Moskva remained in service until the late 1990s, when she, too, was scrapped.
Save this product for later