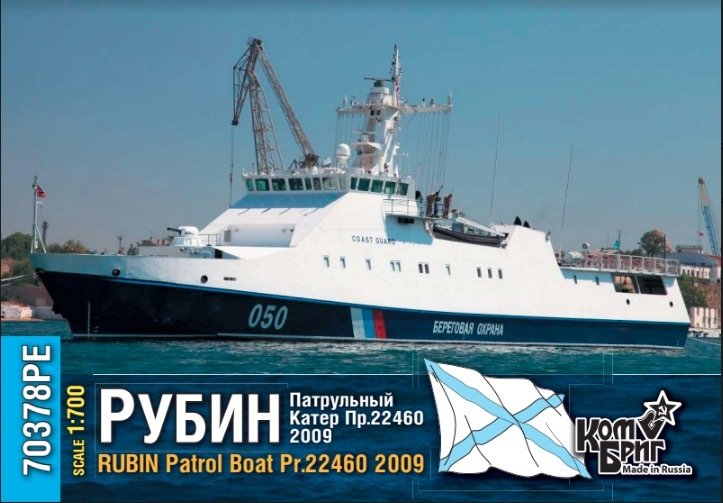 Project 22460 patrol ships, design cipher "Hunter" - the type of diesel frontier patrol patrol vessels of the territorial sea of the second rank. Can be attributed to small corvettes.

PKRR Project 22460 is designed to protect the state border, territorial waters, the continental shelf, for emergency rescue operations, as well as for the implementation of environmental control and the elimination of the consequences of natural disasters. Along with the protection of the border, the task of ships of this class may include operations to combat terrorism and sea piracy.
The ships of Project 22460 differ from their predecessors not so much by armament as by shipbuilding qualities, said Vladimir Spiridopulo, General Director of the Northern PKB in 2008. So, the ship will be able to carry service when the sea is in turmoil of 6 points, while maneuvering freely. They have a new form of hull and increased seaworthiness - speed in calm water up to 30 knots [3]. The outer contours of the ship are designed using elements of stealth technology [4]. In the stern of the ship there is a slip for lowering a fast boat of a rigid inflatable type or other equipment. The project PKR Project 22460 is equipped with a desalination plant. To improve the habitability, there is a sauna and a small swimming pool. The vessel corresponds to the RRR RF class "About 2.0" (ice 20 cm).
Armament
It is also possible to place the launchers of the "Uran" PCB and the A-220M artillery.
In the stern of the ship is mounted a landing site, which can be equipped with a folding deck hangar-shelter [4] for one light helicopter of the Ka-226 or Ansat type. Also on ships will receive the registration of the Gorizont G-Air S-100 UAV.
Save this product for later